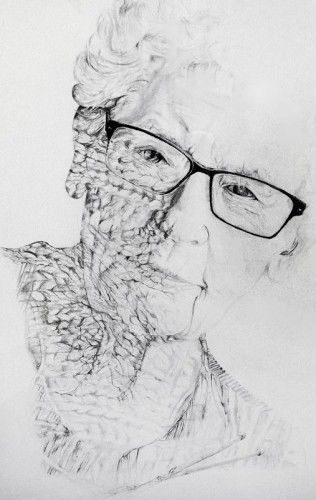 The prize-winner, Sheida Sabet Raftar, was selected from nearly 100 talented young artists in Year 11 & 12 from colleges in the north Canberra region who have been exploring the world around them through photography, painting, drawing, ceramics, textiles and design technology.

Raftar won the award for her work “Lois”, executed in pencil on paper. Lois, the subject of the prize winning work on paper and a resident at Kangara Waters Aged Care Facility, is an enthusiastic knitter, so the artist has drawn knitting needles at the base of the drawing and used the texture of wool throughout the picture.

Exhibition curator and Creative Programs Director at Belconnen Arts Centre, Jacque Schultze, in her last major project for the centre before   leaving for Sydney, visited each school in selecting the work. “I am very excited about the quality of the work this year, and have been impressed by the dedication of all the teaching staff and college principals who so enthusiastically support the students’ creative expression,” Schultze said.

The exhibition is presented throughout all the exhibition spaces in the Centre, including the Gallery, Foyer and Arts Lounge, and is an important feature of the yearly exhibition program.

This prize is provided as part of Ray White Belconnen’s ongoing community partnership with the Belconnen Arts Centre, which is now into it’s 5th year.