In a sign that things may be on the improve, last week saw both properties taken to Auction sell, with 2 Holland Street Macgregor being sold a few days prior, and 66 Goodwin Street Lyneham being sold under the hammer to the only bidder. In addition this past weekend yielded inspection numbers higher than we have seen in the past 6 months, with an average of 7 groups to each open home. The long term average for Ray White Belconnen has been closer to 4 inspections per open.

On the flipside buyers choice continues to grow, with August registering an unusually high number of new listings to market according to figures released by allhomes.com.au: 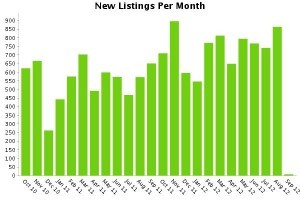 The front page of the Canberra Times last week carried an article stating that Canberra House Prices have been the most affected of all Capital cities in the June quarter, with the median price falling by 5%. This would certainly be at the top end of the scale from what we are seeing, but it is fair to say that in our experience top end property (over $700,000) has been more affected than the lower end of the market.

It is true to say that property in a good location which is well presented and well promoted continues to attract multiple inspections and is selling well. With recent interest rate drops flowing through, we are recommending that now is the time to act for buyers to secure what may be the best buying conditions for years.