Following a period of sustained growth, and a number of industry awards, including being the most recommended agency by third party site ratemyagent.com.au, the Ray White Belconnen team was announced as the Medium Agency of the Year at the REIACT awards on Saturday 6th August.

Director and Auctioneer Scott Jackson was on hand to receive the award, which recognised a number of factors including Net Promoter Score as well as agency performance, something that Jackson says has always been a focus for the Ray White team: 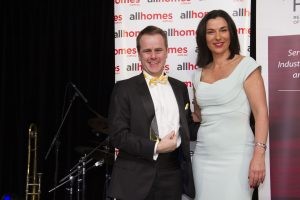 “Our business journey to date has had many ups and downs, however we have tried to always maintain our focus on putting the relationship that we have with our customers at the centre of everything that we do” said Jackson.

“We believe that maintaining this ethos has been the cornerstone which has helped us grow to now become the largest individual real estate business in the ACT”.

Also recognised was Ray White Belconnen agent Jake Battenally, 23, who saw off some strong competition to claim Novice Auctioneer of the Year. The award was the icing on the cake for a year that saw Battenally recognised as one of the Ray White Elite – a prestigious group incorporating the top 2% of Agents in the country. Rounding out the Ray White Belconnen awards was the Best Residential Marketing Campaign – over $5,000 which was won for the agency’s efforts in marketing Tallagandra Hill in Gundaroo. The award recognised the unique combination of local and national marketing reach, together with social and digital campaigns which saw the property receive significant enquiry which led to an Auction day sale.

Ray White Belconnen’s preferred supplier for building and pest inspections ACT Property Inspections were also honoured as supplier of the year. The team is proud to be associated with industry leading professionals like Rob and his team.