Three years ago a young guy walked into our office with a big diamond in his left ear, a suave haircut and an abundance of unbridled enthusiasm.

Rough around the edges would be an understatement, but today he stands atop his peers in the Canberra real estate industry as the allhomes.com.au Rising Star.

The story of Sebastian Gutierrez reaching this milestone is a great one. Sebastian started his life as a painter, working alongside his father in his business. As can occur for many young men, he found trouble (or, if you ask Seb, trouble might have found him). 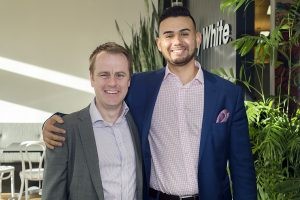 Staring down the barrel of a life he wasn’t sure he wanted to lead, Seb made a choice. Acutely aware that he had much to learn, Seb set out to find a job in real estate. His search quickened when Seb was held up at gunpoint.

The drive to carve out a better life for himself was evident in Seb from day one, however there were many old habits to unlearn. On more than one occasion, Seb was called in the Principal’s office and asked to ‘please explain’. A vast array of learning lessons emerged. Second (and even third) chances were given, as Seb’s desire to do the right thing by his clients was always on display, even when his personal standards fell a little short.

To Seb’s enduring credit he stayed humble, took the cuts, and remained coachable – even when he thought he knew better. He honed his craft, and now boasts unparalleled performance statistics, which have improved the lives of his clients immeasurably:

This attitude of humility and gratitude remains, and despite starting to appear on the radar of his peers and head hunters alike, Seb maintains a down to earth approach – refusing to get caught up in the hubris of others who reach this tipping point in their real estate career.

His words in accepting the awards showed the incredibly partnership which we share with Seb, when (unprompted – who could script such a thing!) he said:

“I want to thank Ray White Belconnen for all the mentoring, and if anyone is looking to make a move give us a call!”

We are very proud of Seb’s journey.

But Seb’s journey is only half of this story – paralleled by his mentor, Scott Jackson.

Scott is the unsung hero of what is one of Australia’s fastest growing real estate businesses – then Ray White Belconnen, now Ray White Canberra.

He is the antithesis of the typical real estate agent – himself presenting as the very definition of humble, and taking ultimate pride in the success of others in the business, even at times to his own personal detriment.

Scott is a rare type amongst his peers – he is a career real estate agent. Having entered the real estate industry at the age of 18, nearly 20 years later, Scott occupies a role in the industry that few thought him capable of achieving. Pigeonholed as a ‘plodder’, Scott has found his own niche working to support other real estate agents on their own growth journey.

Salespeople, both old and young, who like Seb, are looking for a chance to improve the trajectory of their life, flock to him in droves. Scott’s ability to be vulnerable and always see the best in people, coupled with a keen interest in systems and technology together with 20 years of doing deals, in my opinion personifies the modern real estate Principal.

Scott’s own journey has not been all beer and skittles, however he now coaches and mentors the brightest young real estate agents in the ACT. His own battles with losing his mother at a relatively young age, and having to develop coping mechanisms to deal with the deluge of anxiety and stress which real estate agents confront every day, have shaped his unique world view.

We are immensely proud of all of the 50 people working in the Ray White business in Canberra as they strive to get better for their customers every day.

But today we are particularly proud of these two, and are totally excited about what the next 10 years looks like for the two of them.

They both got a second chance. And grabbed it with both hands.

If you’re interested to find out more about a career in real estate with Scott, Seb and the team at Ray White Canberra, please get in touch here

Building a kid-friendly: the new Lego exhibition in Canberra

Seven things to do with a free weekend in Belconnen

Back to all news
Up to Date