Gifted filmmaker, Oliver Levi-Malouf has shown he now dab hand at painting either, taking out the People’s choice art prize for 2015 for his work titled I don’t want to die. Levi-Malouf is perhaps better known for his second place prize at Tropfest Jr Australia, and has also been a finalist in a separate year. You can watch some of his short films here

Levi-Malouf, pictured here with Ray White Belconnen Director Sam Faulks, received more votes for his work than any other in the College Express art collection, and was awarded the $500 cash prize. 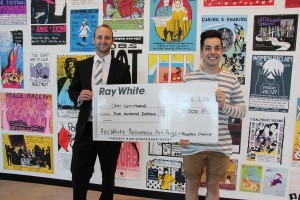 “Each and every year we are blown away b the work that the students present” said Faulks, “and this year was no exception. The whole exhibition was a huge credit to all the teachers and students, and their commitment to the arts”.

The College Express provides a financial prize for the winner and the people’s choice award, chosen from a collection of works across a range of genre. The one caveat being that the contributor must be a current student of a Canberra College. The exhibition was curated and displayed at the Belconnen Arts Centre, which is an important grass roots organisation in the Belconnen community. Ray White Belconnen has been their principal sponsor for the past 5 years.

To learn more about Ray White Belconnen and their work in the community, click here